Samsung Galaxy A71 Review; is it a Worthy Mid-Range Device?

Samsung Galaxy A71 has its roots back in 2019 when in the mid of the year A70, and then a few months later, A70s were introduced after entirely revamping the A series. It is the testament of the fact that the Korean phone maker now gives equal preference to its non-flagship phones that start hitting the rivals from Galaxy A10 and go as high A90. On every interval of 10, there stands a Samsung device now that is becoming more powerful with every new iteration.

We reviewed Galaxy A70 last year and found it a remarkable device with very few glitches, a major being the poor camera performance in the low light. This is the area A series suffers badly.

Whether Galaxy A71 can deliver where it lacked earlier? Let’s start connecting the dots.

Samsung Galaxy A71 isn’t much different in design language than what we experience with Galaxy A51 except for the size of the phone. Samsung has introduced this phone in Prism Crush Black, Silver, Blue, and Pink editions; all carry a prism-shaped rhythmical pattern on a glossy back cover that is curved from each side.

The colors are impressive but subtle, giving the camera module a reason to stand out. All four lenses are placed along with an LED flash in a rectangular frame that juts out more than A51 and causes a wobbling effect when placed on a flat surface. 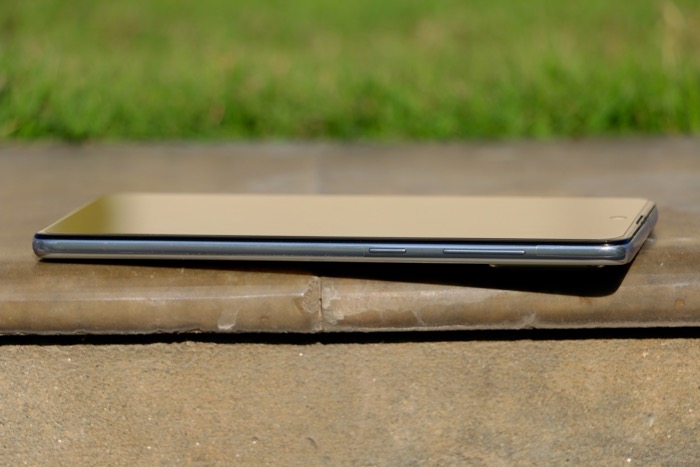 The phone carries usual volume rockers and the power keys on the right side, showing off an impressive tactile finish of the buttons that are easily accessible through the right thumb.

The bottom area is busy with a 3.5mm audio slot, a USB Type-C, a microphone, and the speaker grille. The SIM tray resides on the left side, which can accommodate two nano SIMs and a microSD card.

The 6.7 inches of the display is a joy to look at, especially the punch hole isn’t as irritating as the waterdrop notch. For those who, even, don’t like the cut out can turn it off from the setting area, but this will reduce the precious screen size considerably. 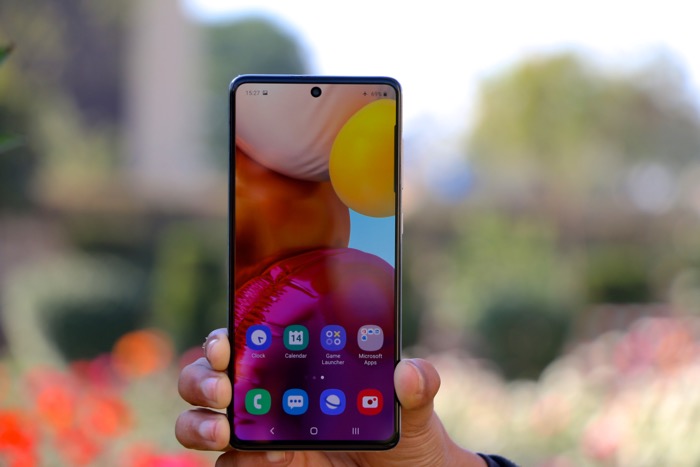 Although Oppo has found this solution of motorized popup camera in Reno2 for giving a clean notchless display in its mid-range category, however, this will add some extra grammage in its weight.

Samsung Galaxy A71 features a Super AMOLED Plus display technology on an FHD+ screen of 1080 x 2400 px resolution. It produces punchy colors and reasonably bright and very contrasty screen quality. The indoor and outdoor visual experience is impressive. The Screen mode in the display setting area gives you a few more options to play with the vividness and warmness of the screen.

Overall, it is a 179gm device that feels really light in hands, and despite a glossy rear, it is comfortable to hold.

Instead of putting a homemade chipset, Samsung has equipped the device with a more reliable Qualcomm Snapdragon 730. Coupled with a huge RAM of 6GB, the Galaxy A71 can survive almost anything you throw at it. It scored 274480 on AnTuTu, a little behind Redmi Note 8 Pro’s 288187 score but ahead of Oppo Reno2’s 260374.

Redmi Note 8 Pro has a gaming chipset which performed extremely well during our tests. The Galaxy A71 doesn’t underperform; it didn’t show us any significant lag or stutter while we pushed it to its limits.

Samsung Galaxy A71 has a 4500 mAh battery that can keep powering the phone for the entire day comfortably. A 25W fast charger comes out of the box that can refill the battery from 0 to 100% in one hour and 25 minutes.

In our video playback test, we could fully drain the battery in 18 hours and 47 mins, whereas, on social media apps, it ate 48% battery in 4 hours, making it one of the best performers just behind Vivo S1 and S1 Pro that still maintain the top positions.

To give you an idea, it consumed 7% battery in half an hour on TikTok, and similarly while recording video, 8% of the battery was dropped. The detail of our four hours battery test can be seen in the following graph. 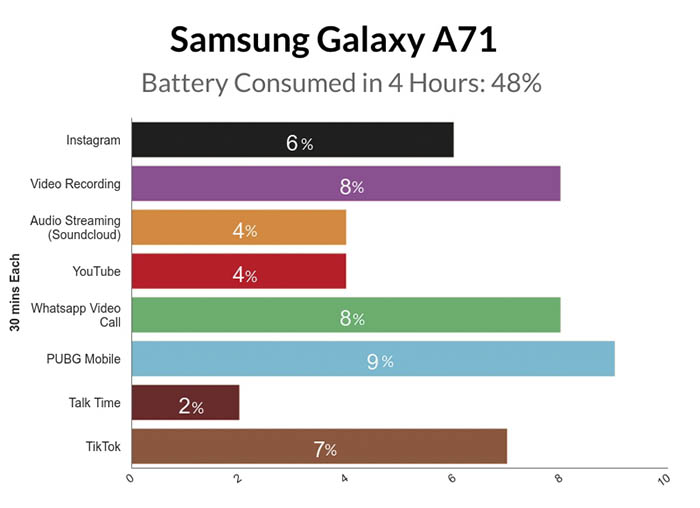 Samsung’s One UI 2.0 finds itself in the Galaxy A71, which is one of the most powerful OS layers on top of Android 10. The latest iteration is a much-improved version of what started back in 2018, with the only focus that is to make user interaction the easiest possible.

There are several options to keep your home screen as clutter-free as possible. An app drawer like layout is available by default in addition to the conventional home screen that can be altered from the home screen setting area.

Other than the security options for your data, including the secure folder and the Samsung Pass, the real fun is perhaps the Edge panels – Samsung’s way for creating shortcuts of almost everything on the phone and categorizing them on different panels. It is a much more user-friendly solution than Vivo’s and Xiaomi’s scattered approach for using multiple widgets in different places for offering similar solutions.

Swipe your finger to the left from the right edge of the screen to reveal the penal, swipe again for another layer of the panel. The Edge panels are active by default; you can alter the sequence, rearrange them, or choose which app, folder, or a function you want them to carry from the display setting area.

Samsung Galaxy A31 boasts a lot of intrend features such as quad-camera and a huge battery. However, not everything is as good as it looks.
Read more

The illustrious Vivo V series has always focused all of its energies on perfecting the art of night photography. With Vivo V17,...
Read more

Samsung Galaxy A31 boasts a lot of intrend features such as quad-camera and a huge battery. However, not everything is as good as it looks.
Read more
Mobile Phones

The illustrious Vivo V series has always focused all of its energies on perfecting the art of night photography. With Vivo V17,...
Read more
Mobile Phones

Infinix Note 7 is a well-balanced phone with 5000 mAh battery life and a Mediatek Helio G70 gaming processor. Read on the review to know its Pros and Cons
Read more