In 2019, Samsung took a page from the handbook of the famous Chinese smartphone companies like Huawei, OPPO, Vivo, etc. and made it its mission to provide a smartphone for every user matching the size of their wallet. That gives birth to Samsung Galaxy A70, an upper mid-range phone of the famous A series that also features entry-level phones of likes, A10, A20, and A30.

The Galaxy A70 is the embodiment of how the firm has learned to combine the premium design language and specs reserved for flagship phones and offer them at a much more affordable price of PKR 68,000 (launch price in Pakistan)

We had the chance to use the smartphone for some time, and we quickly grabbed this opportunity to test out whether it truly was worth the praise or not. Let’s break down all of its interesting features and problems in our detailed review of Galaxy A70.

This year, Samsung managed to overhaul the Galaxy A series completely, but it has kept the design language of its devices almost similar. We sure have nothing to complain about the sleek and gorgeous design of the Galaxy A70, which in its first look, gives an impression of a stretched out Galaxy A50 smartphone.

The South Korean smartphone giant has put a lot of thought on the aesthetics of its devices this year, which was evident to us the moment we first held Galaxy A70 in our hands. Despite the large size, the smooth curved edges on the back make it easier to hold the smartphone in one hand. 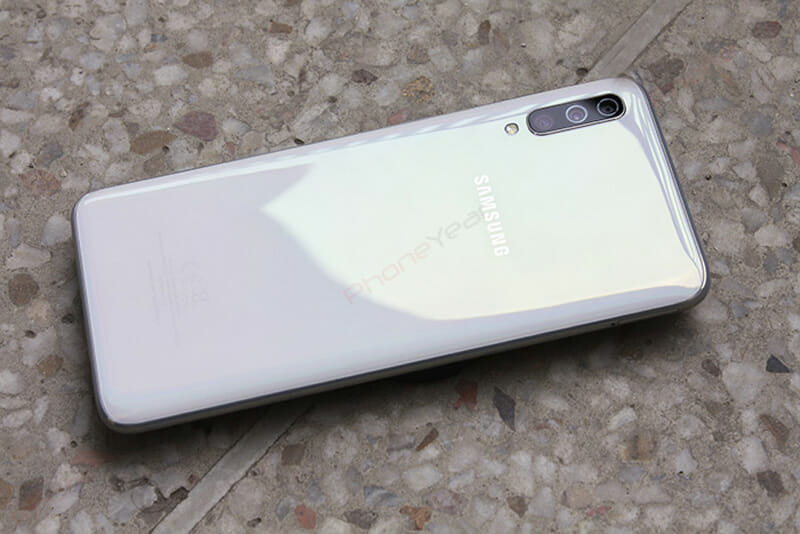 Galaxy A70’s body is made up of both glass and plastic, but what helps it to shine brighter amongst other smartphones is the beautiful paint job that reflects light. But you have to keep in mind that it is a very delicate phone and needs to be encased in a protective cover to avoid scratching the back.

Samsung has kept the beauty of the smartphone intact by offering an in-display fingerprint sensor, and thus, we only have a triple camera setup at the back.

Coming to the physical buttons on the device, you can find the power button and volume rockers on the right side, and despite the large size of the phone, we found it quite easy to reach for them even using a left hand instead of right.

The SIM slot lies on the left side of the smartphone while the bottom features 3.5mm headphone jack, USB Type C charging port, and a speaker grill. 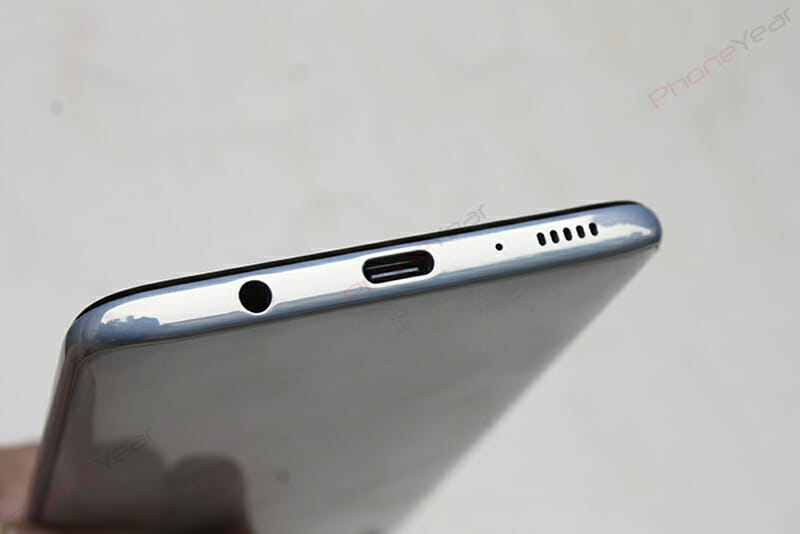 We truly loved how Samsung Galaxy A70 gives the feeling of a flagship smartphone in one’s hands, and though it weighs 183g, you will not find it too tiring to hold the device for more extended periods. 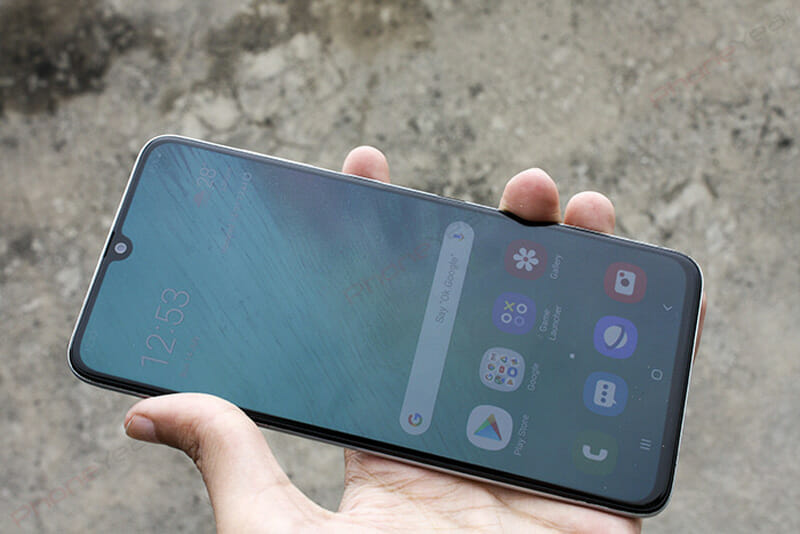 Like all the recent Samsung smartphones with Super AMOLED display, the colors on the screen were quite vibrant and punchy. It was a delight to consume multimedia on such a large screen.

Even though Samsung Galaxy A70 and Galaxy A50 look similar in design, the former has more reduced bezels at the chin, which consequently provides more screen space to the user.

The U shaped waterdrop notch is quite small, and frankly, we prefer it over the cutout in the Galaxy S10 series. The display is also bright enough to show the phone’s content even in direct sunlight, and you can also customize the display by tweaking the settings like white balance, color temperature, etc. to your liking.

Samsung’s OneUI is made to operate large phones with one hand. Since Galaxy A20, Galaxy A30, and Galaxy A50 were quite average-sized devices, we got a chance to test out the company’s claim on Galaxy A70 finally, and no, we weren’t disappointed at all. 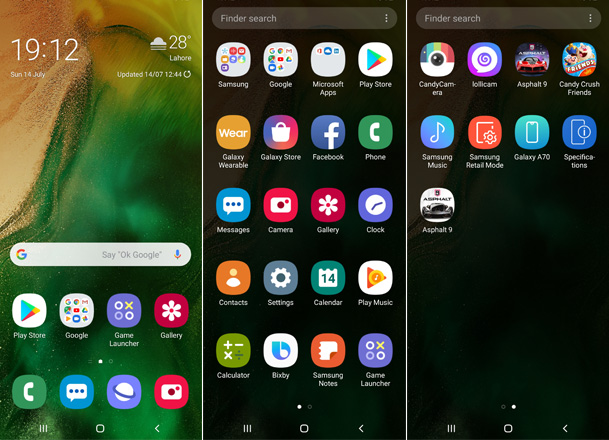 Even with 6.7 inches of display, we were able to use the smartphone with a single hand, thanks to a well-thought, clean, and clutter-free interface provided by One UI.

If you are using the phone with one hand, you don’t necessarily have to swipe from top to bottom to call the notifications panel, as you can accomplish this task by swiping down from the mid of the phone.

Moreover, the notifications panel has been completely revamped to provide a separate page-like interface to the user. The user has the option to choose a different order of the buttons or tweak the grid options in the panel by tapping on the three dots at the top right corner in the notifications shade.

We believe that one of the best features of Samsung Galaxy A70 was the fully-working Bixby AI assistant which was quick and snappy. After setting it up, you have to say “Hey Bixby” to access more than 30 services via simple voice commands, including settings alarms, reminders, look for a song, ask for directions, weather, etc. 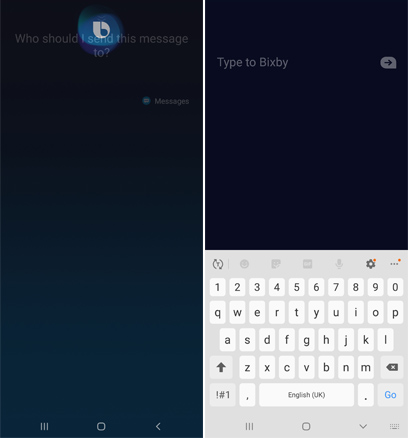 Bixby responded well to our requests and could be summoned even if the phone was a few inches away from us. Furthermore, the phone also has a type to Bixby feature for users who do not prefer talking to their phones.

With One UI, the company has finally changed the default Samsung Internet browser, making it easier to navigate. It now comes with better privacy settings, including the option to add-on compatible ad-blockers right from the browser’s settings.

You can also enable the secret mode (similar to Google Chrome’s incognito mode) to browse the internet without the fear of cookies and leaving a trace of activity in your browser history. It also has a new Smart anti-tracking option, which prevents sites from following you around the web.

To better optimize the smartphone, OneUI brings Device Care feature, which keeps the phone running in perfect health and allows the user to see the status of their phone’s battery, storage, memory, and security in a single place. 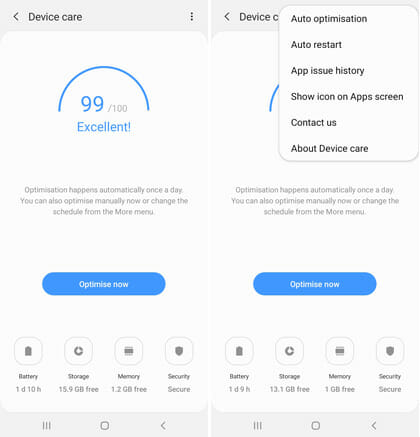 By tapping the three dots at the top right corner, you also can choose from additional options like auto-optimization and auto-restart.

One UI also offers Game Tools feature, which provides different shortcuts to apps like messages, notepad, YouTube, Samsung Internet, etc.  for gamers, accessible via a single tap even when they are in the middle of a gaming session. Furthermore, the user can also record their gaming session to watch it later or share it with friends.

Other small features that made us excited about Samsung One UI are the support for Galaxy wearables, new notes app which comes with categorization options for better organization, the digital wellbeing which keeps track of how much time we spend on a single application so we can be mindful about smartphone addiction and finally the option to use the volume keys for controlling media volume by default.

The Samsung Galaxy A70 is powered by Snapdragon 675 chipset, which combined with 6GB RAM, held its end during our tests. This is the same chipset that debuted with Vivo V15 Pro, and though there are some better options on the market like Snapdragon 710, it certainly doesn’t hold back the power user from getting the most out of their smartphone.

When you first start using the Galaxy A70, you will notice that the device is quite quick. From animations to loading resource-heavy apps, not once did the device stuttered, or we stumbled across a frozen screen.

The Snapdragon 675 comes with an Adreno 612 GPU, which focuses on improving the gaming performance and graphics rendering in Galaxy A70. We spent an hour playing heavy games like PUBG, Dead Trigger, Asphalt 9, Real Racing 3, etc. on the smartphone and Galaxy A70 glided through the whole session, providing smooth gaming experience.

The only downside to the phone’s performance is that after 15 minutes into the gaming session, we felt the heat rising around the camera area at the back. The problem can easily be solved by encasing the device in the company-provided jelly case.

Aside from excelling in performance, the Galaxy A70 also offers lasting battery life through its massive 4500mAh battery. Surprisingly, the phone comes with 25W fast charging support, a feature that previously only belonged to the 5G variant of Galaxy S10.

During an hour of a dedicated gaming session, the phone’s battery fell by 12%, which leads us to believe that the battery life of Galaxy A70 can match the pace of heavy smartphone users.

Also Read: Do you want to check the battery performance of our tested phones?

Moreover, when we used the device for some lightweight tasks like watching videos on Youtube, listening to songs, using social media, surfing the web, etc. the phone only consumed 5% of battery in 30 minutes.

There is not much difference in battery consumption in light (5% in 30 minutes, ~10% in 1 hour) and heavy usage, which points towards good software optimization from Samsung’s end.

The sound quality of the Galaxy A70, on the other hand, is quite average as the intensity of the volume depends on different types of multimedia and apps.

At full volume, we could easily listen to the YouTube videos even if the phone was a foot apart, but at the same time, while playing games like PUBG, Shadow Fight 3, etc. we had to opt for headphones to immerse ourselves into the game. You also cannot play Netflix videos on loudspeaker unless you are sitting in a silent room without any external noise.

Samsung offers pretty standard earphones in the box with the Galaxy A70, but you can enhance the listening experience by enabling Dolby Atmos, which is also available for Bluetooth audio.

Two years since its official launch in the mobile world, Realme has successfully expanded its empire by launching different series of smartphones...
Read more

Once upon a time, the Galaxy A series was all about mid-range phones but since its merger with Galaxy J series last...
Read more

Samsung Galaxy A31 boasts a lot of intrend features such as quad-camera and a huge battery. However, not everything is as good as it looks.
Read more

The illustrious Vivo V series has always focused all of its energies on perfecting the art of night photography. With Vivo V17,...
Read more

Two years since its official launch in the mobile world, Realme has successfully expanded its empire by launching different series of smartphones...
Read more
Mobile Phones

Once upon a time, the Galaxy A series was all about mid-range phones but since its merger with Galaxy J series last...
Read more
Mobile Phones

Samsung Galaxy A31 boasts a lot of intrend features such as quad-camera and a huge battery. However, not everything is as good as it looks.
Read more
Mobile Phones

The illustrious Vivo V series has always focused all of its energies on perfecting the art of night photography. With Vivo V17,...
Read more
Mobile Phones