Last year we came across a plethora of phones from the Chinese manufacturers, including Huawei’s sub-brand Honor, whose flagship killer, Honor 10, set the bar pretty high for mid-range devices. Now the company has launched the device’s younger sibling Honor 10 Lite for users.

The device comes after the launch of the much-famed Honor 8X smartphone in Pakistan. It’s a mid-range device and offers all the nitty-gritty features of a modern smartphone. However, in a saturated smartphone market, it’s tough for a phone to take its place without providing something unique to the people.

So does the Honor 10 Lite has what it takes to steal your heart? Let dig further into the in-depth review to know if the hype around the phone is real.

Those expecting a high-end glass finish may be disinclined to the phone, but the truth is that design is one of the best parts of this phone. Although it has a plastic body and a plastic frame as well, the glossy look on the back is a looker.

The back has a dual-camera setup vertically aligned on the top left corner. Although it looks clean and nifty, it is still a bit intrusive, with the lenses slightly bulging out. The fingerprint scanner sits in the middle and the curved edges on the back result in an excellent grip and feel of the phone

The shiny rings around the fingerprint scanner and the camera lenses give a pretty slick look. The right side of the phone has the power key and the volume rocker while you get the dual SIM Hybrid slot along with a noise cancellation mic at the top of the phone.

The lower end of the phone has the micro USB charging port along with a single speaker grill, a primary microphone, and the 3.5mm headphone jack.

The sleek body of the device ensures an excellent grip and increases the usability with one hand. We had the blue color for review. It also comes in a gradient color, which goes from white to blue. 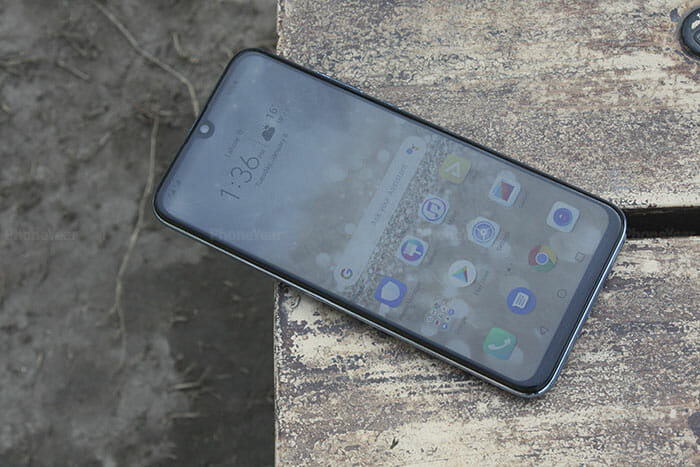 The handset has a 6.21-inch IPS LCD panel, which comes with a resolution of 1080 x 2340 pixels, which makes the colors on the screen quite sharp.

The phone has a 19.5:9 aspect ratio, which is quite taller than most midrange phones that we have reviewed, like the Redmi Note 6 Pro, Vivo Y95, and Nokia 6.1 Plus.

The screen houses a waterdrop notch and also has a chin at the bottom, which interestingly also houses the notification light, a unique placement from the company. 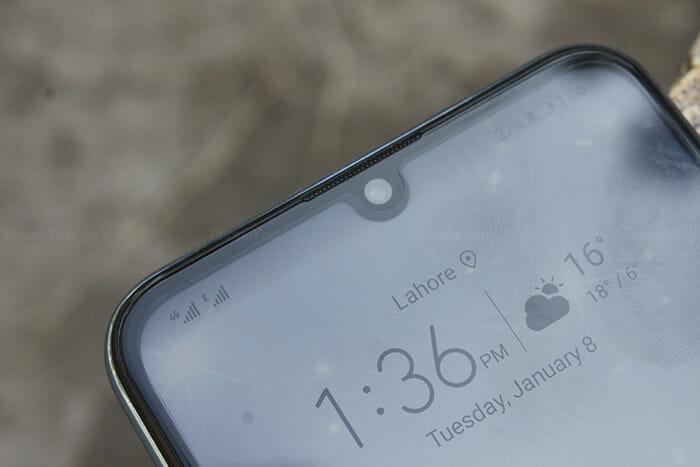 The viewing angles are also pretty decent but not too great. As for the brightness, when cranked to full, the screen gets incredibly bright, increasing the legibility in sunlight.

Adding to that, you’ll also have to deal with the reflections on the screen in daylight, even if the brightness is full. All in all, the Honor 10 Lite has a decent display that could have been done better.

Another best part about the phone is its software, and by that, I mean that it comes with the latest Android Pie based EMUI 9.0, and you’ll get all the nifty features of Google’s latest OS on it.

Huawei Claims that the EMUI 9 is 25.8% faster and uses GPU Turbo for more optimized gaming. Moreover, a considerable focus remains on AI with Huawei HiVision in the camera that can detect similar things when pointing at an object. You can also translate different languages through HiVision.

The gesture navigation has also made its way to EMUI. You can either opt for single button navigation, the traditional bar, or completely button-free gesture navigation. The digital balance feature is also a useful tool to tell you how much time you spend on the phone in different apps and lets you control it.

Granted that EMUI is still full of bloatware and comes up with unwanted suggestions and notification now, and then, it doesn’t hinder the usability of the software.

Honor 10 Lite packs a Kirin 710 processor from HiSilicon, paired with a 3GB RAM and a 64GB internal storage. One can’t but notice the insufficient amount of RAM being provided in the price of PKR 38,999 as we can see many phones with a lesser price tag and more RAM like the Nokia 6.1 Plus that also happens to pack a glass body.

The phone also performs average in benchmarks. Here are the benchmark scores from Antutu and Geekbench.

As for performance, we did not experience any significant stutter to call it a lousy performer; however, occasional and negligible lags did happen in moderate usage individually when opening the apps for the first time. When the apps were already opened in the background, we didn’t experience any inconvenience.

On heavy usage, however, the phone exhibited quite the opposite behavior. Heavy games like the Asphalt 9 and Deer hunter took forever to load, and that’s because the insignificant RAM has to cope with the bloatware as well as the heavy games.

Another noticeable trait of the phone is its heating up during intense gaming. A few frame drops in the Asphalt 9 were also noticed. Another strange thing is that the notch optimization is weak on this phone. Although in Honor phones like the Honor Play or the Honor 10, we didn’t experience it, the notch seemed to cut out a part of the display content in some apps.

The speaker quality is pretty loud on the phone. On maximum volume, you won’t get any hint of cracking or loss in quality and gets pretty loud, but on the downside, it gets very sharp and shrilling. 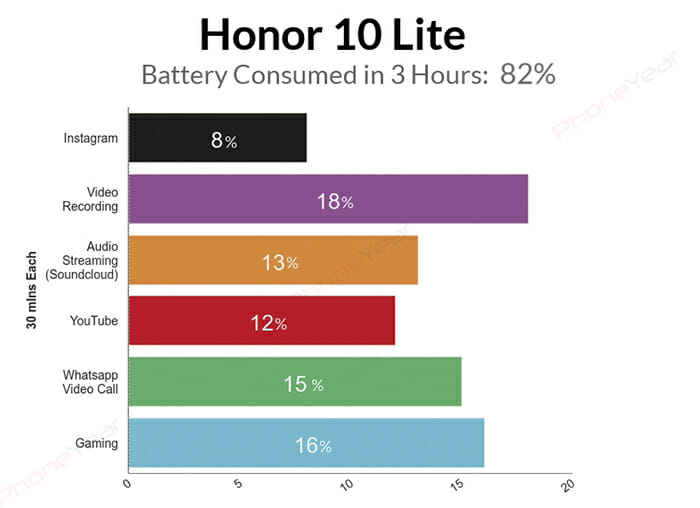 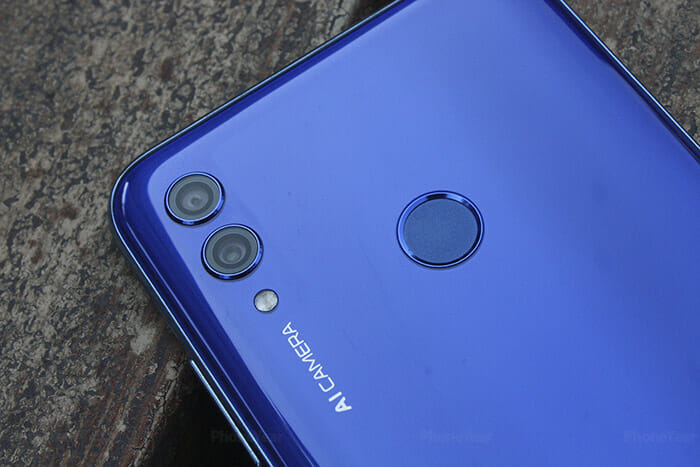 The camera holds significant importance in a phone. For some people, it is almost a certain feature to buy or not to buy a device. Honor 10 Lite packs a dual-camera setup on its back with a 13MP + 2MP lenses. The front has a 24MP selfie camera equipped with all the beautification and AI features.

The camera interface is simple. You can swipe left and right to choose between different modes like Aperture, portrait, and photo, etc. You can also find extra tweaks and options in the More category.

For the result, although it captures detailed pictures in ample light, they came out a bit over-saturated for our liking. In Auto Mode, the device performs good, whereas AI mode enhances the color too much that doesn’t look very natural. Although it brings out details, however, it takes away the naturality of the picture.

The HDR in bright light works fine and slightly tones the picture colors to bring out a more dynamic range instead of overtreating the photo. Look at the clouds in the following pictures to understand the difference better.

The phone, however, struggles to capture good pics in low light. A lot of noise creeps in low light, and even turning the HDR one doesn’t help a lot. AI, however, manages to decrease the noise.

AI also helps to maintain proper color contrast in a well-lit subject at night when Auto mode fails to do so and blows out the colors.

Thanks to the dual camera, you can also shot portraits with a blurred background to give you a DSLR effect. The same can be done with the selfie camera. Still, while the rear camera maintains a good subject outline while blurring the background, the front camera poorly blurs the subject in patches and cannot decide about the outline properly.

The same goes for the Aperture mode on the rear camera, which is nothing but a disaster and fails to recognize the subject line properly, even with a close-up shot.

While in some areas it performed well, overall, the camera of the phone failed to impress us for many reasons. Poor lowlight performance, oversaturation of colors being the main reasons.

Let’s come to the moment of truth. Honor 10, although being a hyped device, definitely does not justify its price well because of its poor performance thanks to the 3GB RAM, there are numerous offerings in this price range that come with a 4GB RAM.

The display of the device is also decent enough and certainly not the best ones out there. Although it has a plastic build, we can excuse that as the plastic body has become more of a norm for mid-rangers.

All in all, the device leaves considerable room for improvement and definitely could have been better, but if you are a moderate user, this phone could be a perfect choice for you, provided that you are willing to spend Rs. 38,999 on it. 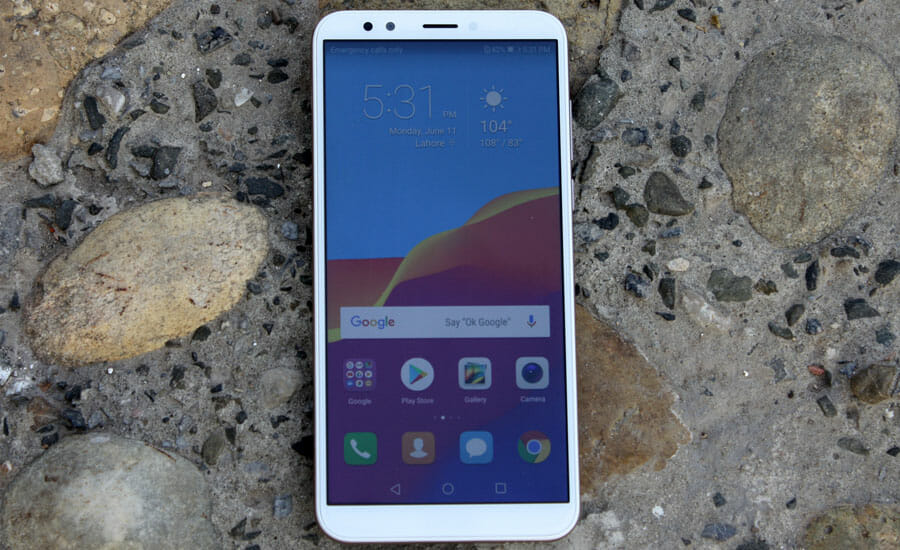 3 thoughts on “Honor 10 Lite Review: Looks Are Not Everything”