Oppo has been making some of the most exciting phones lately like the Oppo Find X, which right now still holds the crown of the highest screen to body ratio. The company claims to be the selfie expert and has released another phone in its F series, that focuses solely on the selfie camera, Oppo F9.

It comes as a successor to this year’s Oppo F7, which was released just five months ago. Maybe its the pressure built by competition that led the Chinese manufacturer to launch another phone within such a short time.

While the device doesn’t provide an impressive spec sheet, certain things certainly amused us. With a mid-range price tag, Oppo F9 eyes to compete with the like of recently launched Honor Play and the Huawei Nova 3i.

Let dive into our full review of the smartphone to know whether it will able to give the users a better experience than its competitors.

Looking at its predecessor, you can see how Oppo F9 has taken a huge leap in terms of design. We are literally left in a daze by the beauty of the phone. The phone’s body may look like a mix of metal and glass, but it is made entirely out of plastic. The fingerprint scanner rests on the back along with a horizontally placed dual-camera setup in the top left corner of the phone.

The phone carries an exquisite design. On the back, there is a flower petal pattern visible when light reflects from certain angles adding to the beauty of the phone. Even with a good stare-down look, it is hard to tell whether the phone sports a plastic or a glass back.

On the front, we find a tiny waterdrop notch that holds the camera, above which you can clearly see the ear-piece. Everything else about the design of the phone is pretty standard.

On the right, you can find a solo power key wheres the volume rocker is located on the left side of the phone along with a dual-SIM tray and a dedicated microSD card slot to expand the phone’s memory.

The bottom of the phone houses the charging port, a single speaker grill, a microphone, and a 3.5 mm headphone jack. It’s a shame that Oppo still uses the micro USB port for charging and hasn’t yet switched to USB Type-C.

What really makes the phone stand out is its gradient color. The phone comes in three colors, Sunrise Red, Twilight Blue, and Starry Purple. We had the Red one for review, and it looked stunning, going from bright Red and fading to Purple as you reach the bottom of the phone.

Oppo F9 uses a 6.3-inch large display with Full HD+ resolution (2340 x 1080), which equates to 409 ppi and an aspect ratio of 19.5:9. With a compact notch and a nearly bezel-less screen, Oppo F9 delivers a pretty fantastic viewing experience.

The display on the phone is quite sharp and pleasant to look at. The screen is even bright enough to use in direct sunlight.

Color reproduction and viewing angles are equally good, and we didn’t notice any interruption in our immersive viewing experience except for the fact that the notch extends to cut of the content on the screen if you are playing games or watching movies.

It can be turned off manually for all apps one-by-one, which is another nuisance. Why not just optimize the notch to hide automatically whenever there is full-screen content played?

Oppo F9  comes with the company’s custom skin ColorOS 5.2 slapped on the Android 8.1 Oreo. Time and again have we asserted how the Color OS is our least favorite part in Oppo phones. It not only removes some of the aesthetics of the Android experience but also tries to mimic iOS.

A lot of Android options and shortcuts have been stripped in the ColorOS, for example, you can just swipe way notification to dismiss in Android, not in Oppo! It requires a swipe and then again a click, which is irritating.

However, not everything is doom and gloom in the ColorOS. It also provides some great options like Full-screen multitasking, where you can swipe from the notch to reveal the multitasking menu. It can also be customized to your liking.

When typing a password on your phone, Oppo secure keyboard opens up instead of your ordinary keyboard, to keep your privacy safe.

All of these features become an annoyance instead of a convenience when they are placed inside many other options and require too many clicks to reach, which is why we prefer the EMUI more than ColorOS, which may be although bloated for now but is evolving with every new version.

Oppo F9 packs a MediaTek Helio P60 Octa-core processor, which is a mid-range chipset, and, more disappointingly, it is the same one used in the previous model, F7. The RAM, however, got an upgrade from 4GB to 6GB. The device comes with 64GB internal storage only. It also performs alright on the benchmark testing. Here are the results from AnTuTu and Geekbench. 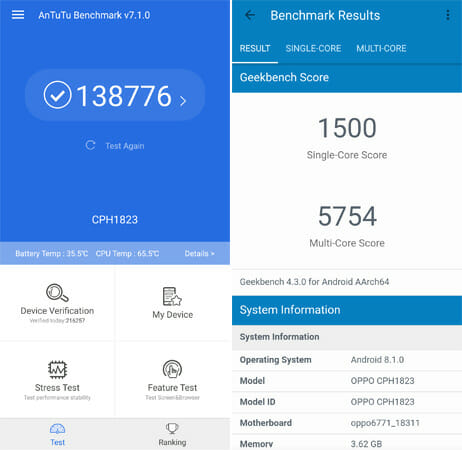 We did not notice any lag or any sign of slowing down when browsing through the phone, surfing the internet, loading web pages, and all the other activities that are the trait of a moderate smartphone user.

However, the problem crept in when heavy usage and intensive gaming was carried out. After some time, the phone began to feel a bit warm and started to exhibit sluggish behavior.

Though there is a dedicated game mode to improve gaming performance, we did not notice any significant difference with or without the game mode. Oppo F9 struggles to play games like Real Racing and deer hunter, which are a bit graphic intensive, but it shocked us to see the phone got stuck while playing the Asphalt 9: Legends, which is a very resource-consuming game.

In terms of battery, the handset performs admirably and leagues better than its predecessor. Oppo F9 packs a 3500 mAh battery that supports fast charging. The company claims that with 5 minutes of charge, you can have 2 hours of talk time.

The device packs a dual rear camera with 16MP as the main sensor and the 2MP as the depth sensor for those blurred background pictures. On the front, you can find a 25MP camera sitting in the waterdrop notch. Keeping up with the trend, the camera comes loaded with the AI features.

As much as we were expecting from the phone’s camera, it disappointed us. Oppo F7 housed a single camera that got upgraded to a dual-camera setup in the Oppo F9, so it was natural to get our hopes high since the camera is the selling pitch of Oppo phones.

With auto mode, the phone clicks decent pictures in a good light. The images produced are sharp, natural-looking, and have a good dynamic range. But sadly, the moment you turn the HDR on, most of the time, it deteriorates the quality of the picture badly.

Super vivid mode enhances the colors to the extent that they look artificial. Photos snapped in super vivid mode clearly look oversharpened and far from natural, especially when there’s greenery in the picture.

The portrait mode does not allow the user to enable or disable the background blur manually. Instead, the blur (aka bokeh effect) is always on by default, and the pictures come out; let’s just say, average.

The selfie camera is where Oppo shows its might, but we recommend to turn the beauty mode off before clicking a selfie unless you want your facial contours to vanish and whitewashed.

Oppo F9 offers plenty of features that are the epitome of a 2018 smartphone. A near bezel-less screen with a compact notch and a very appealing design form are the significant traits of the phone.

Despite the average performance, this phone is a good choice for those moderate smartphone users who want a long battery with a stunning design. Although the phone isn’t a game-changer and has its own shortcomings, it certainly shows the company’s innovation in design.

After months of leaks, previews, and beta programs, Android 11 is finally live. The new software was announced on 8th September 2020...
Read more

Infinix Zero 8 is coming with some tall promises in Pakistan. The company believes its 64MP camera can revolutionize the mobile photography.
Read more

Big Battery Phones of 2020 you should know about

Infinix Zero 8 is coming with some tall promises in Pakistan. The company believes its 64MP camera can revolutionize the mobile photography.
Read more
Guide

Big Battery Phones of 2020 you should know about

Only a few months after the arrival of Realme C11, which we’ve previously tested for you, the company has introduced its successor...
Read more
Mobile Phones

Huawei Y9a carries a flagship look mimicking the iconic Mate 30, an 8GB RAM, and 40W supercharger. Check out the rest of the details
Read more