2018 was the year of the notch when almost all smartphone brands rushed to offer this feature after it was first introduced by Apple in iPhone X. The purpose of the notch was to provide fewer bezels and more screen to the users and this year, the mobile phone manufacturers are looking towards smartphones with pop-up camera to solve this problem.

Pop-up camera feature made its first debut at MWC 2018 in the Vivo Apex concept device which was later launched as Vivo Nex. Following Vivo, OPPO also introduced mechanical front camera slider in its flagship OPPO Find X which hid the entire camera assembly, allowing it to pop-up only when required.

In 2019, the two companies have further refined their technology and have offered smartphones with pop-up camera for the mid-range users. Following their lead, many other brands are also bringing this feature in their new devices but with its pros, pop-cameras also come with a few cons.

If you are looking to get your hands on smartphones with pop-up camera in 2019, you can choose from the following list: 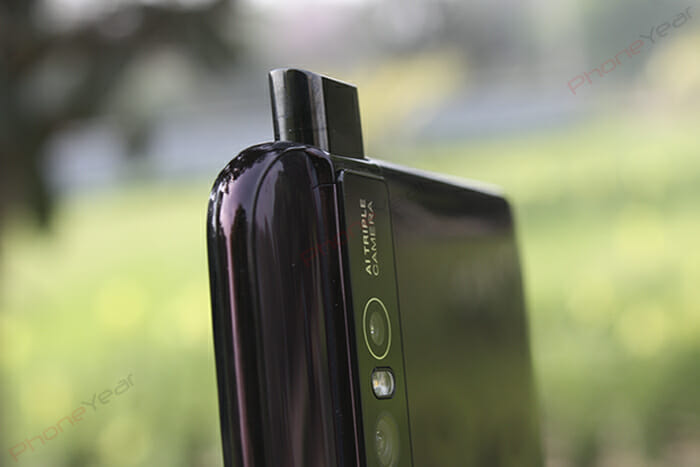 The pioneer of smartphones with pop-up camera finally introduced this unique feature in its mid-range devices, Vivo V15, and Vivo V15 Pro this year.

The two smartphones are available in the Pakistani market and come with the almost bezel-less display without any notch or a cutout. The motorized pop-up selfie camera appears whenever the user switches to selfie mode in the camera app or is using face recognition to unlock the device.

Though we adore the large screen which comes without any front camera, the bump created by the triple camera setup and the front camera at the back of the device makes it a bit wonky when it is lying on a flat surface.

During our detailed review of the device, we also noticed that the phone displays a warning when you turn the pop-up camera on and off several times in a row saying that the activity may damage the front camera and takes some time to close down on its own.

The company claims that Vivo V15’s pop-up camera can be used 100 times per day for 8 years and although it didn’t face any injury during our repeated summoning, the delayed shut down makes us doubt about its durability. 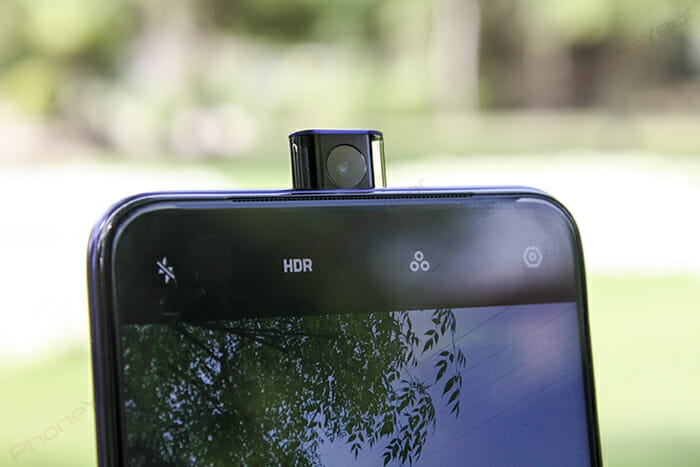 OPPO created quite a buzz last year with the launch of its flagship Find X smartphone featuring a pop-up camera and this year, just like Vivo, it has introduced the technology in its popular F series smartphone, OPPO F11 Pro.

The clearly outdone Vivo in providing a camera setup that does not come with an ugly lump at the back. The pop-up camera is placed at the top-center of the device and appears when called upon.

Unlike Vivo, there was no warning or delay when we repeatedly called out the pop-up camera of the phone while testing the device for our detailed review. The phone smoothly even after suffering heavy abuse from our hands.

Though the company claims that OPPO F11 Pro’s pop-up camera can be used 100 times per day for 6 years which roughly translates into 219,000 times, we still need to be careful with this feature as it is a motorized component that can give out if an external component gets stuck in its mechanism.

Samsung, which tried to go around the notch trend with its punch-hole display feature finally gave into the recent trend and introduced a slider in its Galaxy A80 mid-range smartphone.

Unlike its Chinese counterparts, Samsung’s new sliding camera comes with a unique twist of using the same dual camera for selfies and normal pictures. The company has ditched the front camera altogether and offers a motorized sliding camera which comes with a spring-loaded rotate mechanism that can turn the rear camera to face forward when you are taking a selfie.

It is the first smartphone that comes with a rotating triple camera setup combining a 48MP f/2.0 lens with an ultrawide (123-degree) 8MP lens and a 3D depth sensor.

When you switch between the rear and front cameras, the phone performs two moves simultaneously, popping the slider upwards and spinning the lenses to face the user. The phone is yet to be launched for the consumer markets so we’ll have to wait and see if any problem will arise in the future.

The smartphone’s front camera slides from the side to take a selfie or unlock the smartphone through face recognition. We can’t wait to see whether it will be a feature exclusive to Reno phones or will make a debut in other OPPO phones as well.

Vivo has unleashed another pop-up camera phone with the name of Vivo S1 Pro in the smartphone market. It is the elder sibling of recently launched S1 smartphone and comes with some improvements under the hood.

The placement of the pop-up camera is similar to what we saw in Vivo V15. Looking at the pictures, you can notice a small bump at the back where the cameras reside. We hope that the company will further work on the technology to make it look more appealing.

Huawei has started 2019 with a bang with its P30 pro smartphone that is being praised as the best camera phone for low-light photography. It has managed to create quite a buzz in the tech world and now with Huawei P Smart Z, it is looking to cash in the latest pop-up camera trend in its mid-range device.

The company has yet to unveil the new smartphone for its users but thanks to the recent leaks and rumors, we know almost all about its specs. The pop-up camera of the smartphone will appear from the top-left side and will feature a 16MP lens for taking selfies.

The device’s renders do not show any protrusion unlike OPPO F11 Pro and Vivo V15 and we will have to wait and see how it will differentiate its pop-up camera from the other phones.

Realme is another company that is jumping the bandwagon of the latest trend and will soon introduce smartphones with pop-up camera. We saw the glimpse of the yet-to-be-released smartphone recently in the company’s theme song video where a group of people was taking a selfie using a phone’s pop-up camera.

According to the leaked teasers, the smartphone is expected to be called Realme X and will be arriving with a Realme X Youth Edition on 15th May in China. It will hopefully make its way into the South Asian countries in the coming weeks as well.

Xiaomi is rumored to bring a new flagship smartphone with Snapdragon 855 chipset and the latest teasers by the Chinese company confirms that it will be coming with pop-up camera for selfies.

The pop-selfie camera will appear from the top-left side of the smartphone and will likely take on the Realme’s upcoming smartphone with the same feature.

Redmi is the company’s budget and mid-range smartphone series that offers quality specs at an affordable price. Thus, we are not sure about the introduction of a flagship device in the Redmi family as it has Mi series for that purpose.

The upcoming OnePlus 7 Pro will be getting a new design this year thanks to a retractable pop-up camera which will provide an all-screen display to the user.

It will be yet another addition in the list of smartphones with pop-up camera releasing in 2019. The placement of the smartphone’s back and the front camera is quite different from other smartphones, and the sleek look makes us curious to see how the company solved the problem of bulkiness created by the inclusion of pop-up camera.

Huawei is rumored to bring the new pop-up camera feature in its latest budget device, Huawei Y9 Prime 2019. It may be one of the cheapest smartphones to offer the trending front camera to the users.

So far, we haven’t seen how the smartphone will look like, but since the company will be experimenting with the pop-up camera feature in Huawei P Smart Z, we can expect the camera placement to look the same in the two phones.