In April 2018 Samsung smartphone sales grabbed the top position in global market leaving its biggest rival, Apple way behind in figures but according to a recent report, Apple has regained the top position again for the month of May 2018 with its recent offering, the iPhone 8.

Counterpoint Research has released its list of best-selling smartphones for the month of May 2018 and Samsung Galaxy S9 and Galaxy S9+ have taken the toll on sales, plunging down to sixth position and a second position in sales respectively.

The sales figures show that Apple has captured most of the market with its iPhone 8 that holds the number one spot while iPhone X and iPhone 8 Plus acquired a third and fifth spot in global sales respectively.

It’s not the first time that Samsung has faced difficulties in sales. Galaxy S9 has been struggling for sales since the time of its launch and the staggering initial sales of the phone couldn’t cope up for its poor sale record afterward.

Huawei P20 Pro, despite its excessive marketing, didn’t even made it to the top 10. The only Huawei phone to make it to the top 10 is P20 Lite. Here is a detailed graph of the market share each company has achieved via their specific model. 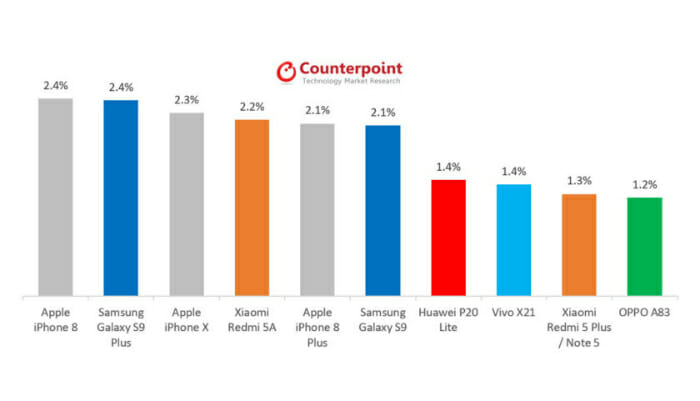 The report also narrates that while the Samsung smartphone sales are declining in Europe month-by-month, Xiaomi is getting popular among the users and Redmi 5A, a budget device has even crossed the Galaxy S9 in sales, sitting on the fourth position.

The report suggests that Huawei keeps growing in its home market. The P20 series saw a good sale performance and gained a combined share of 2.6%, but the only individual phone to make it to the list was P20 Lite. Huawei has managed to grow its business by 51% between 2010-2017 and has aimed to sell 200 million smartphones this year.

At this pace and sales pattern, it won’t be long when Apple and Samsung smartphone sales seem puny against the emerging Chinese companies like Xiaomi and Huawei

The most famous Pakistani TikTok stars

TikTok stars like Jannat Mirza, Pinky Francis, Zulquarnain Sikandar have gained a lot of popularity over the years. Their status rivals those of celebrities
Read more
Features

Online mobile selling an opportunity, but a challenge in Pakistan

Like global smartphone sales, the Covid-19 has hit Pakistan's smartphone industry harder. Can online mobile selling help the industry or not? Read on.
Read more