The Samsung Galaxy S10, Galaxy S10+, and Galaxy S10e are excellent devices, but they aren’t perfect. We’re already hearing about an assortment of Galaxy S10 problems from early adopters and the list will surely grow as we push away from their release date.

While it is very disappointing to see such problems pop out so early in such an expensive phone, we do hope that Samsung caters to these Galaxy S10 problems or this might truly dent the sales as well as the reputation of the device.

Don’t get us wrong here. There is also a lot of great feedback regarding the phone. It’s just that we were not expecting the problems to pop up so soon in such a high-end phone when competing with the likes of Huawei Mate 20 Pro.

Here we will guide you through the current state of Galaxy S10 problems and though Samsung may solve these with software updates, you should still keep these in mind when buying the latest flagship from Samsung. 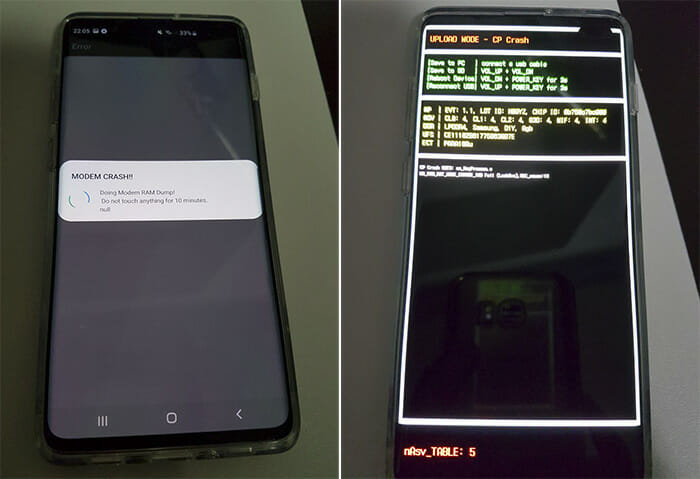 While hanging at startup might not be as common, unexpected crashes in Android phones are sometimes we all are aware of and even the latest offering from Korean giant could not escape this nightmare. One of the more common Galaxy S10 problems is its software crashing for no apparent reason, as reported a Reddit user HyperBaka.

“crashed on the 2nd day of usage, was playing the game on the phone when this happened. did not make any changes to my phone, only added minimal apps since I started using it,” wrote the user in the original post and also shared the images where the phone went into some kind of recovery mode.

It seems the reason for such galaxy S10 problems is still unknown as the users suggested to take the phone to Samsung to get it checked for faults.

This one has been reported by a senior member of the xda developers, one of the most reliable platforms to seek answers for any problem regarding smartphone. The user named  bubu23 reported that the battery drain is excessively fast and that the phone drains almost 20% of battery in 1 hour and that too with light usage like social media browsing.

The user then went on and compared the Galaxy S10 Plus to his previous smartphone, Pixel 2XL, which gave a better battery life than the S10 Plus.

Now keep this in mind that the Google Pixel 2XL had a 3520mAH battery while the Galaxy S10 Plus has a massive 4100mAh battery and if the problem is occurring even after that, it means that the optimization is poor on the device and the company needs to fix it.

Another nuisance that most people are facing is the fingerprint sensor scanning for your finger even when it’s in your pocket.  It wakes up the device when it’s not supposed to. In turn, this is causing the device’s battery to drain much faster than it normally would.

More frustratingly, this problem persists even when you turn the Always On Display off. This is one of the Galaxy S10 problems that has been reported by many, originally by a Reddit user named Drendude

Other than that, some of the users are also reporting the fingerprint not working accurately and that one has to place the finger multiple times to activate the scanner and let it unlock your phone. In some cases, users have to remove the fingerprint sensor imprint and re-add it to make it work.

A Reddit user going by the name Dazpiece reported this problem on the platform where he/she complained about the phone getting hanged on the splash screen on the first startup. As scary as it may sound, the user said that the phone was taken fresh out of the box and even after 10 minutes of displaying the splash screen, the phone did not move forward to start up.

While this may be not of the common Galaxy S10 problems, it’s occurrence is an indication that it could potentially spread wide if not curtailed.

We can well imagine the nightmare you have to face when your $1000 phone gets stuck at its first startup. Thankfully, other Reddit users swooped into the rescue and suggested different ways out of the problem.