Oppo, the Chinese smartphone brand is gearing up to launch the new Oppo Reno, the first smartphone by its Reno sub-brand, on April 10 and the rumor mill for the past few days has led to many speculations and leaks related to the upcoming device.

We are all dying to see what the Oppo’s new hyped phone is all about and until it is released, let’s break down these rumors to determine what we will get in the new Oppo Reno.

According to the leaked renders of the smartphone, Oppo Reno will come with a bezel-less display, a pop-up selfie camera, gradient colors, and an in-display fingerprint sensor.

This is not the first time that the company is offering a pop-up camera feature for its users, we first saw it in Oppo Find X and now the Oppo F11 series which is now available in the Pakistani market. But what makes its camera different is the mechanism. The rumors suggest that the new Oppo Reno will feature a rising selfie camera with a unique angular rising camera mechanism.

If you look at the renders, you can practically see no bezels but these images have the history to lead us a bit stray like the Lenovo Z5 last year, so we suggest that you take them with a grain of salt.

The rear panel of the smartphone is expected to be made of glass and will come in four gradient colors, Black, Green, Purple, and Pink. The renders also suggest dual cameras which make us wonder about the device as the recent trend of Chinese smartphones is triple camera setup.

Techradar has heard the rumor that the company will be introducing not one but 5 Oppo Reno devices, the Pro, Plus, Lite, Zoom, and Youth variants so maybe the renders just belong to a different variant/model. The devices will likely belong to different price segments to attract a wide variety of people.

There is no place for rear-mounted fingerprint sensor which leads us to believe that it will come with in-display fingerprint technology.

Oppo Reno is rumored to come with a 6.4-inch AMOLED display with a 2340 x 1080 (FHD+) pixels resolution. This means that we can expect good color reproduction and crisp images from the upcoming smartphone.

There are various contradictory rumors regarding the processor of Oppo Reno. Some suggest that it is coming with Snapdragon 855 while others say that it will feature Snapdragon 710 chipset.  We can once again leave this anamoly to the availability of more than one Oppo Reno devices, leaving us all in a confused state.

The device is also expected to come with 4000mAh battery to provide juice for the large display and will be paired with Oppo’s VOOC 3.0 fast charging technology.

Looking at different rumors, we can speculate the expensive variant(s) of Oppo Reno will come with a triple camera while the standard devices will feature a dual camera for the users.

According to various leaks, the smartphone will offer a 48MP main camera and 10x optical zoom camera, a technology which although was first announced by Oppo but was first introduced in a smartphone by Huawei in P30 Pro.

As we mentioned before, the device will come with a weird sliding pop-up front camera. You can see the mechanism in the video below:

Oppo Reno is set to launch on April 10th, which is just around the corner. The company’s marketing campaign shows that devices will target young and creative users. The artsy-teasers are quite pleasing to the eyes and feature the work of inspiring artists.

Take a colorful journey through the darkness of night. #GetReadyForReno pic.twitter.com/BiYAhZmx20

Stay tuned as we will be covering the launch of the new devices and we’ll update you about its price and availability. 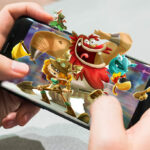