Huawei recently published some images for the promotion of Huawei p30 Pro camera and it turns out that the company was cheating and those images were never taken with a P30 Pro but instead they were DSLR images used without the consent of original photographers.

This is not the first time the company is caught cheating. Earlier, the company did the same with Nova 3 in August 2018 and even before that Huawei faked the benchmark scores of the famous P20 Pro too.

Since its common knowledge now that the Huawei P30 Pro will come with a periscope lens, Huawei tried to cash the opportunity and shared some images on Weibo to show the camera prowess of the device.

Huawei P30 launched, Everything You Need to know about Huawei P30 Pro and P30

As spotted by GSMArena, the volcano eruption image was a DSLR shot and was taken almost 10 years ago in 2009. What’s more embarrassing is that it’s a stock photo from Getty images Similarly, other pictures were also taken from the portfolio of professional photographers.

Surely, Huawei is not the only manufacturer which uses DSLR images to promote its phones, but the images should be at least marked. Instead, the company wants the people to believe that these images were taken by the Huawei P30 Pro, which is plain ridiculous.

It seems Huawei is so bent on selling its phone at any cost that it doesn’t care about how will it affect its potential customers. I am sure most of the people wanting to buy the company’s upcoming Huawei P30 Pro, would have now left the idea after this fiasco.

Imagine being a loyal customer of Huawei and then waiting for the upcoming Huawei P30 Pro and then you see this. It’s really weird to see why Huawei thought of copying such images. 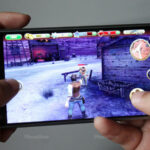