Best Features of Android Q: What’s New in the latest OS from Google?

The latest version of OS from Google is already out now and if you can also install it in your device depending upon which phone you have. Not all devices will receive the Android Q simultaneously however, it’s some of the best features of Android Q that make it a worth waiting upgrade.

Officially, Android Q will not be introduced until May 7 at Google I/O conference. As every year, it has first made its way to the beta version several months before its official launch. After this first beta, the beta 2 has already been scheduled for April, the beat 3 after May 7 and the final version of Android Q will roll out in Quarter 3 of 2019.

One of the best features of Android Q the dark mode. By displaying pure black in the background of applications, OLED smartphones will use less energy and less eye fatigue. It would definitely be the most awaited feature too.

As of the beta version on pixel phones, the dark mode is already present but can only be accessed if you had earlier enabled dark theme of the Pixel Launcher under Android Pie. It cannot be disabled or turned off in the beta version but its obvious that the full version of Android Q will feature a toggle to turn it on and off.

Next on our best features of Android Q is the ability to theme your Android phone. We earlier saw the same thing in OnePlus devices with OxygenOS and now it has made its way to stock Android as well.

n the developer options we find at the bottom the sub-menu Customizing themes. You can choose a different system font, change the shape of the icons and select a new accent color. The possibilities are still very limited in the beta 1 version, but it is very promising. 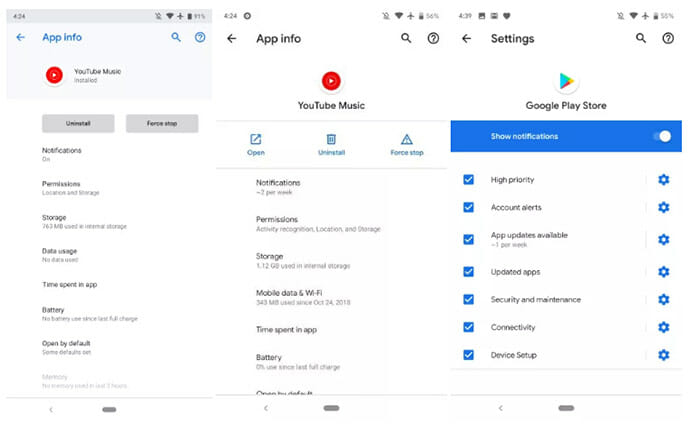 How to prevent an app from monitoring your location permanently? one of the best features of Android Q is that it gives you complete control to choose which app uses your location and if you close an app, let’s say Facebook, it will be impossible for it to continue tracking you down.

This one is an aesthetic change rather than a design revolution. There is an all-new files application that you can use to browse through your phone’s data. Its overall look is simplistic and syncs with the overall look of the Android which looks quite pleasant.

Fed up with the question “what’s your Wi-Fi code”! To answer this problem, Q proposes in its settings to create a QR Code corresponding to your home connection. Other users have to scan it to be immediately connected. When we connect to a new Wi-Fi, we also have the option “scan password”. The smartphone then searches for a QR Code.