Redmi Note 8 Pro could be the game-changer for the phone maker giant that already has a good standing in many Asian markets and home alike. This latest phone comes in two variant, the standard Redmi Note 8 and the pro version.

The bigger version, which Xiaomi is also calling a flagship phone, debuts number of things for the first time. The more significant among them is the 64MP Samsung ISOCELL GW1 lens that acts as the primary camera on Redmi Note 8 Pro and one of the sensors in this quad-camera setup. This is the same lens that will also find its place on next year’s Samsung Galaxy S11.

This is Xiaomi’s first phone with a quad-camera setup, rest of the lenses are 8MP ultra-wide (up to 120 degrees), 2MP depth sensor for bokeh effects and 2MP macro camera for really close up shots.

On the front side, there is a 20MP lens for selfie enclosed in a notch.

Xiaomi released these images that show the camera internals. The 2MP depth sensor is tied up with the 64MP lens and the exciting aspect is that glass cover of quad-camera also serves as the fingerprint sensor. 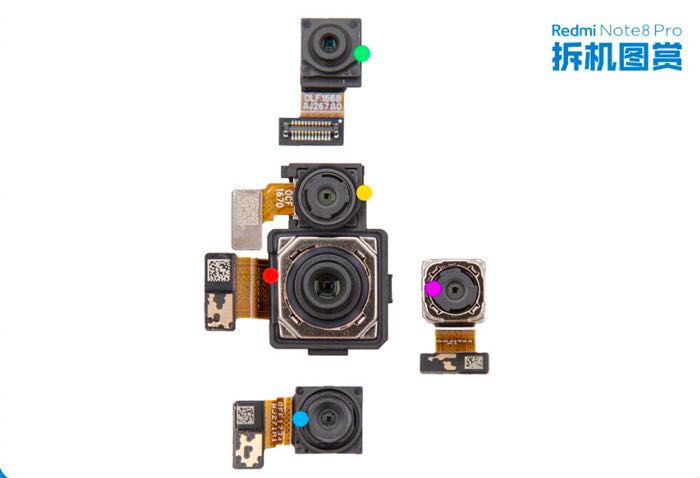 It’s the first phone that carries MediaTek’s gaming-focused G90T chipset along with HyperEngine and Game Turbo 2.0 mode for extreme performance. Xiaomi has designed it to release the heat through a liquid cooling system which is a copper heat pipe that connects the chipset to aluminum chassis of the phone. The setup is supported by an LPDDR4x RAM and UFS 2.1 storage

For processing, Xiaomi has put MediaTek chipset inside that support PumpExpress 4.0 but Redmi Note 8 Pro also sport Qualcomm’s chip for enabling the Quick Charge 4.0+ for a 4500 mAh battery that comes with 18W fast charging support.

The phone can connect with Wifi and 4G at the same time to maintain extreme gaming experience.

The smartphone comes with Android 9.0 and MIUI 10, a 6.53 inch full HD+ display, 6GB and 8GB RAM variants along with 64GB and 128GB corresponding internal memories.