Over time, Vivo has cemented a reputation to be the first brand to introduce innovative features like the in-display fingerprint sensor, as in Vivo Nex. While other brands keep such unique features to their premium phone, it seems Vivo wants it to reach wider. Vivo V11 Pro is the latest example of a feature-packed yet affordable mid-range device.

Vivo V11 Pro is launched in Pakistan with a price tag of Rs. 53,999. Keeping in mind its amazing features like the in-display fingerprint scanning and the smallest notch I have ever seen, I am compelled to say, its a pretty good deal for this price.

Though everything looks good on paper, does Vivo V11 Pro holds enough juice to battle its way in the congested mid-range segment? Let’s hit our in-depth review to find out.

Given that there’s a short interval between the launch of Viv V9 and the Vivo V11 Pro, you shouldn’t be surprised that the latest phone borrows a lot from its predecessor, but that doesn’t mean it’s a ditto of the V9. With a lot of subtle changes, the V11 Pro retains its identifying look with its refined design language.

The phone has gotten thinner than its predecessor with a colorful twist. It’s available in a wide range of beautiful colors, including the Starry night, which we received for review and became a fan of it instantly.

The device features a plastic frame sandwiched between a polycarbonate body and front glass. The volume rocker and the power key, SIM tray, ports, and even the rear camera module have identical placements as its predecessor.

This phone is also very light, thanks to its all-plastic body, and it is easy to manage with one hand. At 7.9mm, the phone is just as thick as the V9, though being slightly taller. This, however, doesn’t add to the bulk of the phone as the curved edges on the back make it quite more comfortable to grip without tiring your hands.

Though it was a little disappointing to see a plastic body, as the glass build has become a norm for mid-rangers, phones with a much lower price tag like the Honor 8X have a glass build, which makes us rethink on Vivo’s material’s choices. Still, then again, a sleek build and some fantastic features make up for this.

On the bright side, a glass body is much more prone to smudges and fingerprints, whereas polycarbonate back is exempted from such a nuisance. Overall the build quality of the phone is excellent and sturdy and fits quite firmly in hand. 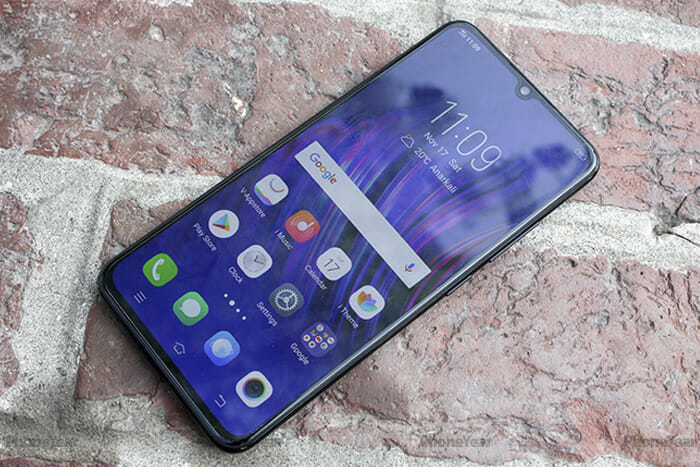 By now, you might have already noticed the small notch design on display. Vivo calls this Halo Fullview display and in the world on ugly large notches; this is truly a breath of fresh air.

As for the display, the colors a fairly punchy, and the blacks are truly deep thanks to its AMOLED display. The bezels and the chin on the phone are also significantly smaller than most of the devices in this price category. 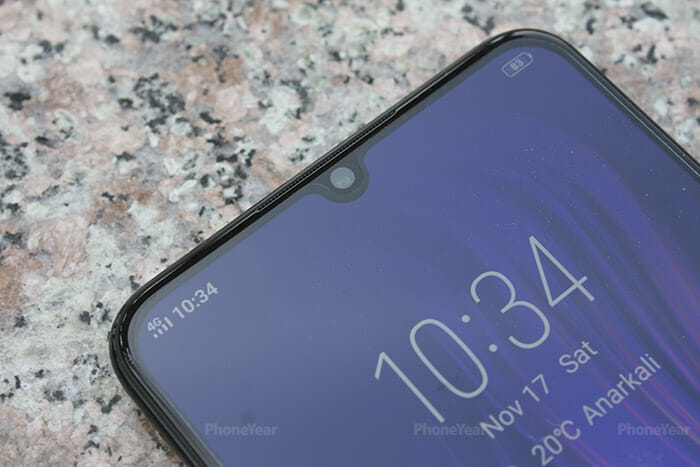 The viewing angles on the phone are amazingly wide, and moving even to the extreme sides doesn’t affect the colors on the screen. Even in bright sunlight, the display doesn’t lose its charm, though it might be difficult viewing darker shaded videos in sunlight.

Just when you think you know everything about Vivo V11 Pro, it surprises you again with its amazing features, of which the display is the most amazing one. It’s important because the device has swapped the traditional fingerprint scanner with an in-display one.

The fingerprint reader expands to a small portion of the screen in the middle and gets some time to get used to it. The position is, however, appropriate, so you won’t have to stretch your thumb to get it read by the scanner.

Vivo V11 Pro runs on the company’s custom Funtouch OS 4.5, which is based on Android Oreo 8.1.0. I absolutely loathe the way all the Chinese phones look the same in case of their custom software overlays.

There are many things common in the Vivo’s Funtouch and the Oppo ColorOS and Huawei EMUI. However, Vivo takes it up further a notch where it copies even more of the iOS features. Swiping upwards from the navigation bar reveals the control center, which includes settings and toggles that are usually present in the notification shade of other Android phones.

Just like the Honor and Huawei phones, Vivo also has a game mode that is aimed to provide the users with immersive gaming experience; however, we did not find the game mode as effective as the one in the Huawei phones because of their GPU Turbo technology.

Other useful options in the Funtouch OS include the App clone where you can activate two social media accounts simultaneously along with the smart click where you can customize the volume down button to launch your chosen action when long pressed.

We did not like the software that much only because it is littered with third-party apps and bloatware. Somehow, Vivo decided to stay with their own smart assistant Jovi though it would have been better if they stick to the Google Assistant, which is way more reliable and fast too.

The handset comes with a Qualcomm Snapdragon 660 octa-core chipset that is backed by 6GB RAM and Adreno 512 GPU. The unit that we received is a 128GB internal storage variant; however, it is also available in 64GB.

The phone performed as expected in the benchmark tests. Here are the scores of Geekbench and AnTuTu benchmarks. 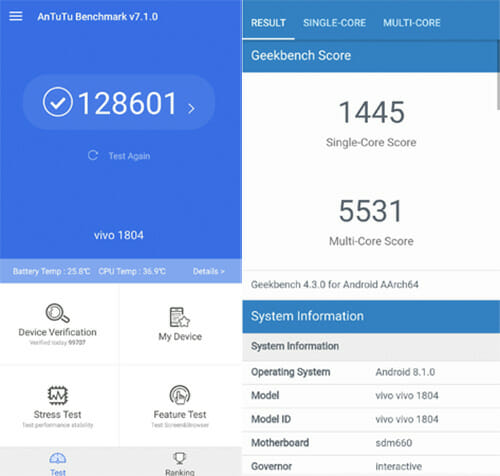 Though it has a mid-range chipset but comes with ample RAM capacity, in day to day handling, the phone accomplishes all the tasks we throw at it. Multitasking in moderate usage is not a problem, and the RAM management is quite good as well, so when switching between apps, you won’t have to wait for the apps to restart.

From light to moderate usage, the phone did not show any sign of lag or any hiccup and handled everything with ease. Since Snapdragon 660 is known for its excellent battery consumption along with a delivering performance and Vivo V11 Pro is here to prove that.

We played Asphalt 9, Deer Hunter, and Real Racing simultaneously while on a 4G connection and continuously went to and forth between the said games and the phone performed buttery smooth.

Even after long periods of gaming and resource-intensive sessions, the phone performed as snappy as the first time it was out of the box and didn’t show any sign of lag. The phone was reminiscent of the Honor 10, another fabulous phone with flagship killing specs. 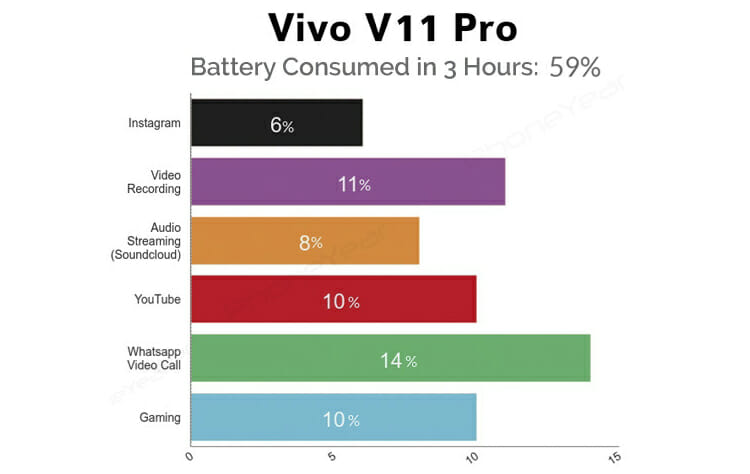 Vivo V11 Pro packs 3400mAh, which is backed by an 18W fast charging, which gives a good charging time of 1 hour 43 minutes from flat to 100%. Moderate usage of 1 hour squeezes 14% battery out of the phone while 1 hour of extensive usage and gaming consumes 18% battery, which indicates the fantastic battery optimization of the phone. 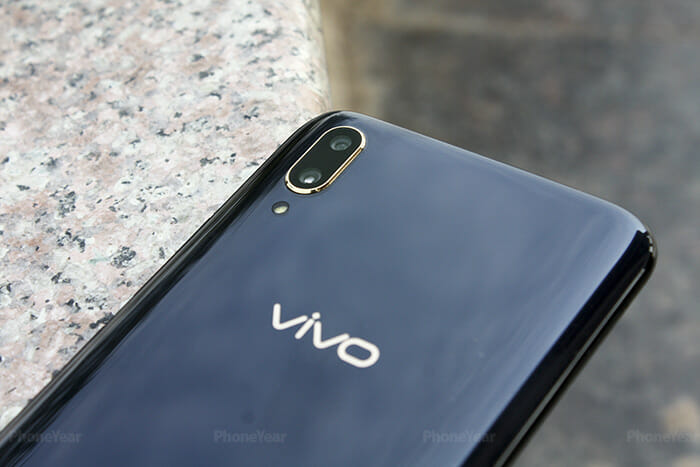 Vivo V11 Pro comes with a dual rear camera setup having a 12MP primary sensor along with a 5MP depth sensor. The camera uses Vivo’s Jovi AI engine for scene recognition, which works quite well in auto-adjusting the settings according to the scenario.

Google lens also integrated into the camera app. Clicking on any object in the camera viewfinder after enabling Google Lens will result in an array of similar objects from the google search.

It’s been long that we’ve seen such a great camera on the phone in this price range. The results come out crisp and punchy. In good lighting, Vivo V11 Pro takes amazing pictures that are full of details, though sometimes it misses out on some minute details.

Unlike its predecessors, Vivo V11 Pro does not overexpose the pictures and maintains a precise balance in color saturation while delivering a tremendous dynamic range. The colors are more true to life. HDR mode pops the colors even more, but not to an extent where it looks artificial.

Pro mode is also available on the phone if you want to alter settings to take your desired pictures.

There are many bits that the Vivo V11 Pro gets right. It has a fantastic screen and is a fast performer. The battery life is good enough, the camera is capable enough to take vivid pictures, and features like the in-display fingerprint sensor make the Vivo V11 Pro look like a phone from 2019.

The Vivo V11 Pro faces fierce competition from phones like the Pocophone F1 and the Nokia 7 Plus; we think that it packs some features that make it quite desirable, especially for the users that want their phone to be something out of the ordinary.