“Crazy fast, Crazy smart” is the tagline for Honor’s first phone with the revolutionary GPU Turbo Technology, Honor Play. It is a respectable mid-range phone with a surprising number of features borrowed from flagships like the Mate 10 and P20 Pro.

With its big screen, a powerful processor, and the Turbo tech, Honor Play is the best choice for your intense PUBG sessions.

But is it worth all the hype? Does the Turbo tech perform as advertised? Is the device worth every penny of your money? Read on to find the answers in our in-depth review of the phone.

We got our hands on the black colored Honor Play, which is a metal unibody, a slim and sleek gadget. We have seen some very cool designs earlier from Honor at the time of Honor 10 and Honor 9 Lite. Still, aesthetically, this phone doesn’t stand on par with few of the fantastic designs of the family but instead gives a feel of an Honor 7C successor in terms of build. However, it sits in hand pretty well due to its appropriate heft.

The placement of keys is a usual trait that we usually see on the Honor and Huawei phones. On the right-hand side, you’ll find a power key along with a volume rocker, both of which are well within the hand’s reach and can be operated single-handedly with ease.

On the left side rests a dual nano-SIM card slot, which can also be used to expand the memory with a microSD card if you wish to use a single SIM. It can be used one-handed, but reaching the top part of the screen is a bit difficult and requires two-hand use.

The device packs a generous 6.3-inch LCD with a 1080 x 2340 resolution, and the iPhone X inspired notch. Well, because it’s 2018 and iPhone is probably the culmination of industrial design, so we see a herd of phones copying the same design in one way or the other. 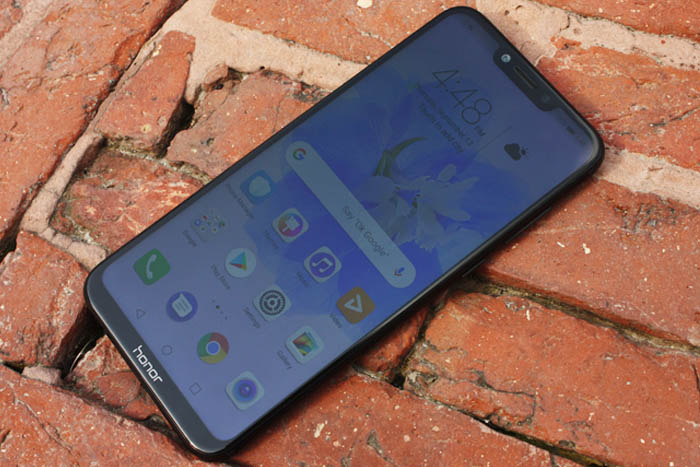 With a 19.5:9 aspect ratio, Honor Play offers a vivid display that furnishes accurate colors and sharpness as much as expected from an LCD Panel.

The viewing angles are pretty good to a certain degree, but as the angle gets smaller, the screen loses its viewability to some extent. The display gets specifically dull when looking from the top. This may not be a serious issue as we have not encountered any problems in normal usage.

Other than that, the screen really struggles in direct sunlight. Even with the brightness cranked to the full, it is pretty hard to browse through the phone outdoors, let alone watch movies or play games in sunlight.

Honor Play features the EMUI 8.2 skin on top of Android 8.1 Oreo. If you have already handled Honor 10, the experience is very similar here. It uses multiple home screens to house all of your icons.

However, if you are addicted to the app drawer, EMUI lets you change the layout and enable the app drawer. There are many other options in the latest EMUI, which include lowering down the display resolution to conserve battery, changing the warmth of display, and the list goes on.

The game mode is another useful feature that you can avail so that during those intense and immersive gaming sessions when you are enjoying a PUBG game with your buddies, no one interrupts.

There is also a party mode that lets you connect with 7 other Honor Play devices to stream the same music through all of them, thus creating a surround sound effect.

What we didn’t like is the number of preinstalled apps. Honor really needs to address this and rid its phones of the bloatware that comes preinstalled. Consistently using phone’s resources, these apps tend to drag the performance of the device down.

The highlighting feature of the Honor Play is its Kirin 970 chipset, which is the same that powers Huawei’s top-notch phones like the Mate 10 series and the P20 Pro. It’s awe-inspiring to see this chip in a device with such a low price tag.

Other specs of the phone include Mali-G72 MP12 GPU, 4GB RAM, and a huge 64GB of internal storage, which should be enough for heavy users, including mobile gamers.

The device also performed well in benchmarking apps and scored decently on AnTuTu and Geekbench. 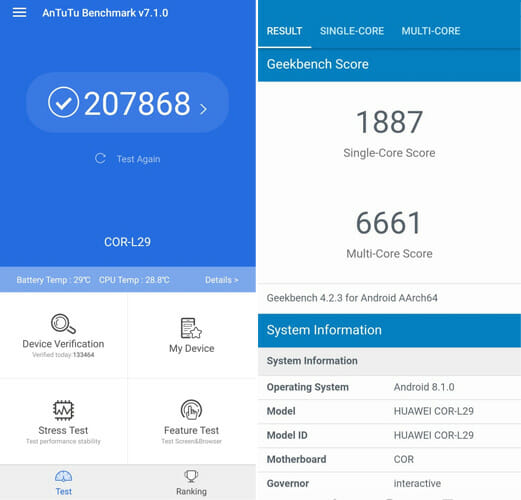 These amazing specs make the phone sail through the most rigorous and heavy usage easily. In addition to the hardware, as we have earlier mentioned, Honor Play comes with software-based GPU Turbo technology, which is not just gimmickry. It enhances the phone’s performance by 60% and decreases battery usage by 30%.

With so much hype, we really wanted to check whether the phone is really “crazy fast” as the company claims.

So we went to play intensive games, and heavy multitasking, and the device turned out to be what the Honor promised it though the company has compromised on design and many other things but has indeed come out with a fantastic gaming phone and that too within a controlled price.

The new Asphalt 9: Legends ran on the device like a charm. We didn’t notice any lag, pauses, glitches, or any frame drops during the game. 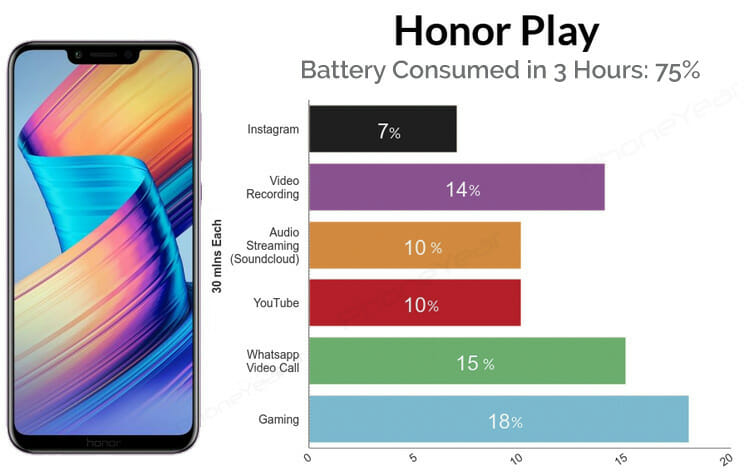 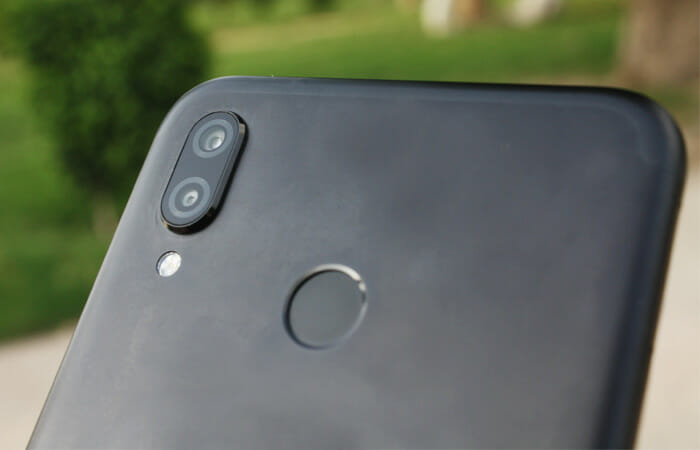 The phone packs a dual-camera setup on its back with a  16-megapixel, f/2.0 aperture lens, and a secondary 2-megapixel sensor with f/2.4 that is used to collect the depth in the picture. Upfront, you can find a 16-megapixel camera sitting in the notch.

In auto-mode, the Honor Play turns out to produce true and natural colors and shows decent enough dynamic range in good lighting conditions. The HDR mode does an excellent job of brightening the darker corners of the picture while maintaining the exposure.

Artificial intelligence in the camera enhances the picture and is capable of recognizing 22 objects in 500 different scenarios.

Though this might be true, the AI robs the picture of its natural colors and aggressively treats the image to a point where it starts looking artificial, which is a huge turn-off.

Wide Aperture mode in the Honor Play is not the best we’ve seen, but it works just fine. You can clearly see some patches where it failed to blur the back and somewhere it excessively did.

The portrait mode identifies the subject promptly and does an excellent job of distinguishing between the background and the foreground.

Here are some of the more samples of aggressive AI treatment of the phone and also how it performs at night along with HDR Mode.

As expected, Honor Play isn’t capable of great low light images, but that’s just fine considering the price tag. The AI, however, helps and brightens up the dark corners and gives a better low light experience. With a well-lit subject, the pictures can come out very convincing.

Honor Play can shoot 4K videos at 30fps and 1080p videos at 60fps. Moreover, if you are a photography enthusiast, we really think you should take pictures without the AI on, to avoid the over-saturation and extra brightening of the colors.

As the name suggests, Honor Play is basically a gaming-centric phone which truly justifies its name with ultra-fast and super-smooth gaming. But you don’t play games all day, do you?

The phone is a sturdy yet slim and sleek device with a long-lasting metal build, and while this may be a personal preference, with such a build, the Honor Play looks cheaper than it actually is. The camera on the phone failed to impress us, and the AI looked nothing but gimmickry having the photos treated harshly and enhancing the colors unwantedly.

Should you buy it? Well, that depends on your needs and usage pattern. If it’s about gaming and performance along with a superb battery, you can go for it with your eyes closed, and you’ll not repent.

But if its camera and premium design you are after and willing to compromise on the performance part, Honor Play might not be the phone for you.