Huawei Y9 2018 comes as the latest addition to the Y series from the company. The series earlier included the Y5 Prime and Y7 Prime (2018 editions). The Chinese phone maker certainly knows how to infiltrate the budget market by bringing all the flagship goodies, like a Full View display and a premium design to its budget and mid-range phones.

Being the latest phone in the series and by the looks of its specs, we expect the Y9 2018 to perform decently. Let’s check out our detailed review to see whether the phone has what it takes to be the best in its price category.

The Huawei Y9 looks sleek and modish with a  metal unibody design. The antenna lines are clearly visible on the back and enhance the looks of the phone. The dimensions of the phone are 157.2×75.3×7.9 mm, and it weighs about 170g, which may be excessive for some, but the sleek design of the phone assists in better handling of the device.

The polished rim around the fingerprint scanner and the gradient running along the antenna lines on the back of the phone give it a premium look. At the back, you will see a dual horizontal camera set up along with an LED flash just at the top left corner and a fingerprint reader just below it. Everything looks good in place; especially, the fingerprint sensor is in comfortable reach without the nuisance of using both hands.

The volume rockers and the power button is on the right side of the phone and are very prompt. The left side of the phone has a 3 in 1 SIM tray having two SIM card slots and a dedicated microSD card slot, which has become a norm for most Chinese phones.

The base of the phone houses the 3.5mm jack, micro USB charging port, and a single-speaker grill. It seems that the midrange devices are not yet acquainted with the jack eliminating trend. I personally think it’s a good thing to keep it because instead of taking away from the phone, it provides an extra yet comforting option. After all, not every one of us owns a pair of good Bluetooth headphones.

The phone is available in Gold, Black, and Blue colors, and we got our hands on the Black and Gold colors out of which, although black looks more catchy with its matte finish but is a smudge magnet. Huawei Y9 2018 has a bold and imposing look to it but doesn’t beat the glassy finish and premium build of the Honor 9 Lite that also falls in the same price category.

Huawei Y9 2018 carries an IPS LCD touchscreen with FHD+ screen resolution, 1080 x 2160 pixels, and 407 ppi density, which is remarkable in this price segment. The display is quite sharp, brightness tones accurately in auto-brightness mode, making it easy to read in bright sunlight.

The display produces natural colors and doesn’t incline much towards the cooler side like most of the other Huawei and Honor budget devices such as the Honor 7C or Huawei Y5 Prime 2018, which have a very slight blue hue spread over the display. 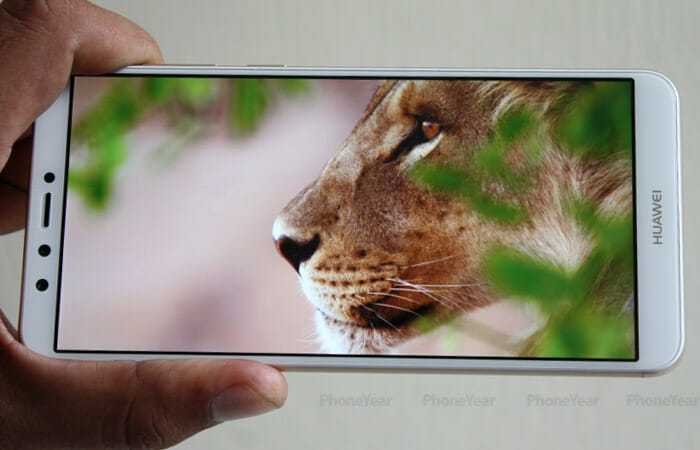 Viewing media and playing games is fun, thanks to its FullHD+ LCD panel. All in all, the Huawei Y9 2018 has a decent display with accurate color reproduction and a high resolution, which should be enough to beat most mid-range phones in this segment.

Given the price category, Huawei Y9 2018 has a superb display and produces crisp colors with excellent viewing angles; however, direct sunlight makes it harder to view videos on the phone.

Huawei Y9 2018 comes with Android Oreo 8.0, coupled with EMUI 8.0, which gives a smooth user experience. The EMUI has evolved from being a buggy and irritating skin to a smooth and facilitating UI.

Besides the display color adjustment in settings and the option to enable app drawer, there are certainly worth mentioning features that Huawei has stuffed the new EMUI with.

We particularly like the Game Suite, an option that lets you enjoy games without any interruption providing you with immersive gaming experience. It displays incoming calls with a short prompt at the top of the screen without interrupting the game. Upon picking the call, the voice is routed to the speaker, so the game keeps running smoothly. 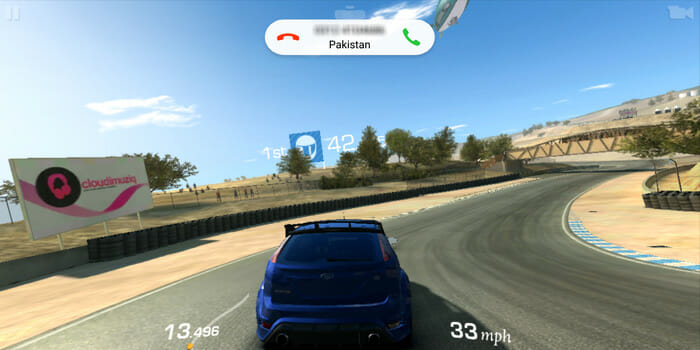 A simple mode can be accessed by going into Settings > System, which displays your home screen in tiles format with a relatively bigger font. This can be specifically helpful for visually impaired people.

Since the phone comes with Android Oreo, you can also snooze notifications in the notification slider. Other than that, Huawei has also included gesture support in EMUI, which means, you can swipe down with three fingers to take a screenshot. You can use the fingerprint scanner to perform different functions like answer a call, take a photo, draw the notification bar, or browse pictures in the gallery by swiping on it.

The phone eyes to give a smooth user experience as the Kirin 659 already proved to be power efficient and an excellent performing chipset in our review of Honor 9 Lite. The phone conveniently handled all the daily tasks, which included Texting, using social media, streaming videos, camera, and multitasking.

The device scored a decent on 87,823 on AnTuTu Benchmark and grabbed a 908 in Geekbench single-core test while a 3731 in the multi-core test.

On light usage, the phone performed exceptionally and didn’t leave any room for doubts or complaints. Huawei Y9 2018 had been our daily driver for quite some time and honestly, got us pretty impressed with its performance in light usage.

Unlike the light usage test, our heavy use affected and dragged down the performance of the phone a little bit making it lag occasionally and taking time to respond

The phone displayed processing gaps and hiccups when heavy games like Modern Combat 5 were played. If you are wondering about the heating of the phone, yes, it did get warm after intense gaming sessions and heavy usage.

After getting warm, the volume keys on the phone also took some time to respond, but the phone temperature didn’t rise enough to be unbearable. A slight change in temperature after heavy usage is a common phenomenon.

An amazing battery is the strongest trait of the Huawei Y9 2018. It packs a 4000 mAh battery to satiate the phone’s power needs. Sadly, the phone doesn’t support fast charging and takes forever to charge, but on the bright side, its battery would not die on you and can easily get you through a day even with heavy use. It took the battery 2 Hours and 48 minutes to charge from 0% to 100%, which is a substantially long time. 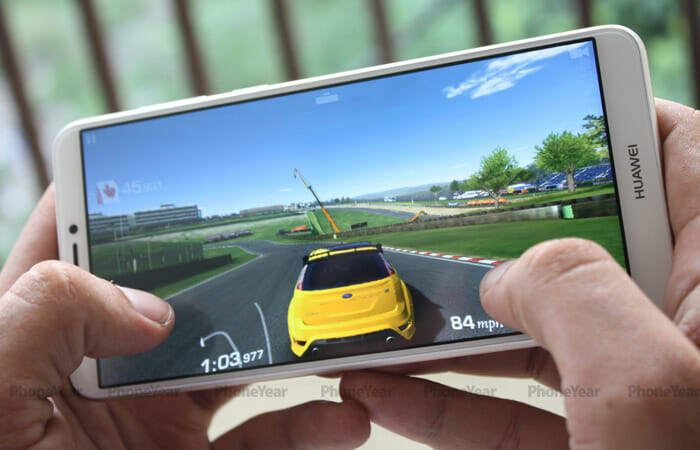 A highlighting feature of the Huawei Y9 2018 is the quad-camera setup on the phone. It is equipped with dual rear cameras of 16MP + 2MP resolution and dual front cameras with 13MP + 2MP.

Both the camera setups work typically, i.e., one lens gathers the depth of field while others capture the details. After testing the camera, we concluded that the phone definitely boasts a better camera than the Huawei Y7 Prime 2018. Still, it’s not as good as the Honor 9 Lite camera setup that produces more vivid yet natural-looking colors with a balanced amount of sharpness.

The camera in Huawei Y9 2018 offers plenty of modes, and if you are creative enough, you can make the most out of it. These modes include a wide aperture, HDR, bokeh mode, Good Food, AR, Light painting, and Pro mode.

The color capturing on the rear camera is adequate and natural. Under plenty of light, the camera snaps gorgeous pictures. The HDR mode enhances the colors and brings a noticeable difference to the photographs, all while keeping it natural.

Though food mode enhances the color, it also overexposes the picture and oversaturates the color.

Wide aperture mode on the camera is specifically very irritating and faces a hard time differentiating between the subject and the background and as a result, spreads patches of blur on the subject. Even trying multiple times produced the same result of blurring parts of the subject in the picture.

With a well-lit subject, the camera performs more than average and captures decent colors at night. Although the loss of a little bit detail is noticeable in the picture, we surely can’t expect much from the phone considering the price tag.

Here is another picture with HDR mode where the camera successfully pops up the colors of the subject but not to the extent that it looks artificial. Again, a slight loss of detail can clearly be spotted, which we have to forgo, keeping in mind the midrange specs and lower price of the phone.

Huawei Y9 promises a decent performance with mid-range specs. Things that we liked the most on the phone are the design, display, and especially the battery life that amazed us during our tests.

As for the performance, it does day to day tasks with ease and performs sufficiently for the needs of average users. However, if you are an avid gamer and want to buy a mid-range phone for heavy gaming, you might want to look for alternatives like Honor 9 Lite in the same price range or the Honor 10 in the higher price segment.

While the AF was pretty quick in the camera and it captured decent pictures in Auto and HDR modes, the camera failed to meet our expectations in Bokeh Mode, Wide Aperture, and good food mode.

Should you buy it? Well, if you can compromise on heavy gaming and a little bit of camera trickery, Huawei Y9 2018 is worth every penny you will spend on it.